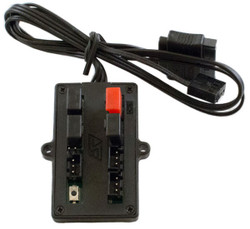 Important note: the Skulls depicted in the above schematics symbolize the fact that users should NEVER attempt to connect the 3-pin female ALED connectors found in Swiftech's accessories (waterblocks, kits, etc..) to the male 4-pin fan connectors found on the Iris-Eco controller or anywhere else on the motherboard; in effect, this type of component uses 5v current whereas fan connectors use 12v current, and doing so would result in permanent damage to the LED's.
Specifications summary:

This product hasn't received any reviews yet. Be the first to review this product!

All prices are in USD. Copyright 2020 AeroCooler. Sitemap |